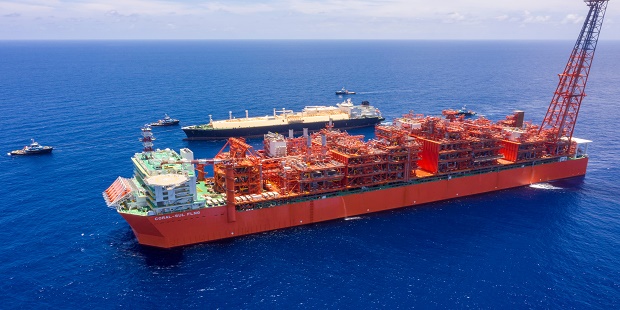 The Italian explorer ENI, as Delegated Operator of the Coral South project on the Coral South Field in Area 4 in the deepwater Rovuma basin, describes the event “as a new and significant step forward in ENI’s strategy to leverage gas as a source that can contribute in a significant way to Europe’s energy security, also through the increasing diversification of supplies, while also supporting a just and sustainable transition”.

Area 4 is operated by Mozambique Rovuma Venture S.p.A. (MRV), an incorporated joint venture owned by ENI, ExxonMobil and CNPC, which holds a 70% interest in the Area 4 exploration and production concession contract. In addition to MRV, the other shareholders in Area 4 are Galp, KOGAS and ENH, each with a 10% participation interest. ENI is the Delegated Operator for the Coral South project and all Upstream activities in Area 4.

The first commercial discoveries of gas in Area 4 were made by ENI in 2021, months after Anadarko “opened” the Rovuma basin with discoveries in Area 1. The announced shipment indicates it has taken 12 years for the discoveries in Rovuma to reach the market.

“Coral South is a landmark project for the industry and firmly places Mozambique onto the global LNG stage”, ENI says. “The project, sanctioned in 2017, comes on stream after just 5 years, in line with the initial budget and schedule, despite the disruptions caused by the COVID pandemic”, ENI says.