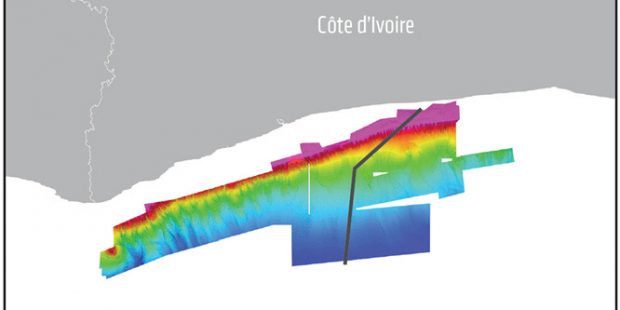 By Marcus Michelangelo, in Accra

Tullow Oil has signed Production Sharing Contract for new offshore exploration licence in Côte d’Ivoire in order to chase leads in the country’s segment of the Tano Basin.

Tullow produces hydrocarbon in the Ghana segment of the basin, but its forays in Cote D’Ivoire have not delivered commercial results.

In 2021, however, the Italian explorer ENI reported the discovery of a massive tank of oil and gas in their first wildcat in Côte d’Ivoire. Baleine-1X was drilled in 1,200metre water to a TD of 3445metres, targeting Cretaceous sands in the Tano,which is a Transform Margin.  The company currently carries a figure as high as 2Billion BOE as ultimate recoverable reserves in the Baleine Structure.

Tullow’s managers, clearly sat up and took notice. Houston based Vanco (now defunct) had held the acreage in 2007 and just fell short of drilling this major prospect, supported by amplitude and a large ‘gas cloud’, according to a report by GeoExpro. In 2013 and 2014, Lukoil drilled the Capitaine East, Independence and Orca fields nearby, finding sub-commercial volumes of oil in Upper Cretaceous sands, GeoExpro explains.

Tullow’s management is convinced it can deploy the geoscientific skill sets that helped ENI to nail the Baleine mega structure. “Significant prospectivity has been identified within the proven Cretaceous turbidite plays, similar to the plays which are producing in the adjacent TEN and Jubilee Fields. The work programme for the initial two and a half years includes reprocessing of existing 3D seismic data, along with prospect evaluation. In CI-524, a number of drill candidates are being matured while preparations continue for an exploration well to be drilled during 2024”.

« Smarting from a Stalemate in Nigeria, ExxonMobil Exits Chad and Looks to Wind Up in Eq. Guinea
Savannah Terminates SPA With PETRONAS in Chad, Cameroon »