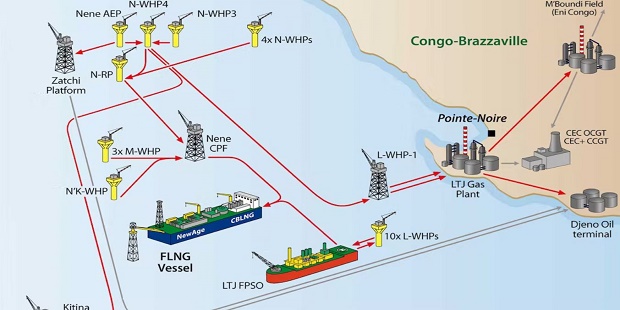 By Sully Manope, in Brazzaville

Italian producer ENI has launched a second Floating Liquefied Natural Gas (FLNG) project to increase the production of and export from the Republic of Congo.

The company announced it had signed a contract with Wison Heavy Industry for the construction and installation of an FLNG unit with a capacity of 2.4Million Metric tons per annum (2.4MTPA). The FLNG will be deployed offshore the Republic of Congo, widely known as Congo Brazzaville.

This facility will be the second FLNG to be deployed in the country, the first one being Tango FLNG (0.6 MTPA capacity), with LNG production expected to begin in 2023. With the second FLNG, overall LNG production capacity on the Marine XII field will reach 3Million tons/year (3MTPA), which is ~160 Billion standard cubic feet/year or 440MMscf/d in 2025.

The 380 metre long and 60 metre wide vessel will be anchored at a water-depth of around 40 metres and will be able to store over 180,000 cubic meters of LNG and 45,000 cubic meters of LPGs. Preliminary activities have already started, with long lead items ordered and steel cut of cryogenic tanks occurred on December 20th.

“Both initiatives are part of Marine XII gas valorisation plan, in line with ENI’s strategy to leverage gas equity”, the company says in a statement.