Will 2023 see a Revival of the Deepwater Market? 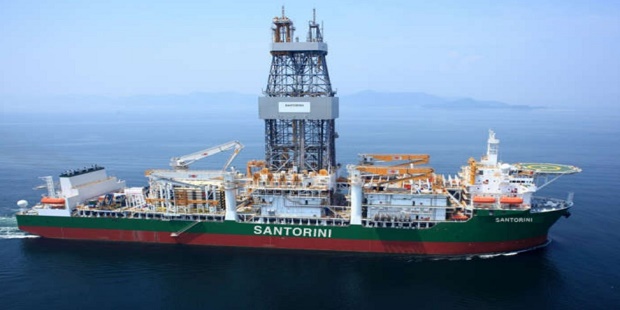 Is the deepwater market on the cusp of a revival in 2023? Preliminary signs are promising. Yet to participate in this marketplace requires very deep pockets and stamina. While the drilling fraternity has undertaken the necessary rationalization—witness Saipem selling its land rigs to KCADeutag and the merger of Noble Drilling and Maersk Drilling—the oil majors have indicated that it will be business as usual. How will the deepwater marketplace develop in an ongoing turbulent energy future? Is there room at the poker table for the deepwater players who are being constantly overshadowed by energy scenarios which are predicting the early death of the oil and gas industry and hence the deepwater sub-market? Have deepwater exploration and development been given a premature death sentence?

Two opposing scenarios are currently in play: the re-emergence of the offshore marketplace, in particular the deepwater plays; and the International Energy Agency (IEA) ’s recent prediction that in the period 2022-2027 there will be a sharp growth by 2,400 gigawatts (GW) in installations of renewable power. That renewables are becoming a bedrock of the energy transition is not in doubt. Less sure is whether the deepwater players will have a continuing staying power. How will the oil majors divide their capital budgets between oil and gas projects and renewables? Below an overview of what to anticipate in 2023.

Saipem, in turn, has announced that it has purchased the Santorini, an ultra-deepwater drillship, from South Korea’s Samsung Heavy Industries to strengthen its offshore drilling fleet amid the growing demand in the market. Saipem disclosed that its purchase option of $230Million will be financed entirely from available cash. 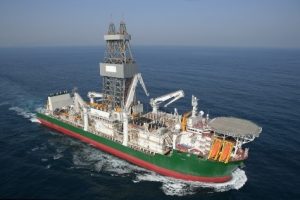 Can the deepwater drillers expect better times in 2023?  The terrain, according to WoodMackenzie, is the fastest growing upstream oil and gas venue: production is expected to hit 10.4Million Barrels of oil equivalent per day (BOEPD) in 2022 and will reach 17MillionBOEPD by the end of the decade.

“Brazil remains the leading deepwater producer, it accounts for around 30% of current global capacity and will continue to grow. Guyana, the most significant new entrant, will be producing 1MillionBOEPD within the next five years. In total 14 other countries will contribute to the deepwater supply mix in the coming years.” 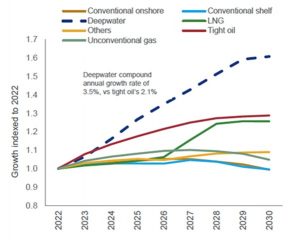 According to WoodMackenzie the sector remains under the control of a small number of key players: “Petrobras and the seven majors dominate deepwater production, operating 22 of the top 25 deepwater assets. Petrobras’ deepwater portfolio is around twice as big as its nearest peer, Shell, which stands out among the majors for leading production and cash flow. ExxonMobil and TOTALEnergies show the highest rates of growth this decade.”

According to a recent Valaris investor presentation 2023 and beyond will provide the drillers market conditions not seen for many years:

At present the deepwater drillship fleet has been rationalized to 158 units from a peak of 281 in late 2014; the jackup supply has declined to 493 units from a high of 542 in 2015. Yet one-third of the jackups are more than 30 years old and have a limited use for the future.

Majority of the deepwater rigs are very modern, only 16% of current supply is older than 20 years;

Because of improved market conditions, rationalization of the offshore fleet utilization for both drillships and jackups is above 90%.

A key component of BP’s strategy is building an investment structure, which requires only a few skilled accountants. The company has either sacked employees or will be delegating BP’s headcount to its joint ventures. The goal is to become lean and mean, reducing costs and, hopefully, increasing margins. In short becoming an investment vehicle.

A key strategy is to decrease its oil production by 40% by 2030. In Angola  BP has merged its upstream activities with ENI to form Azule Energy, which could become a model for other African countries.

To date the company has initiated a series of joint ventures to speed up its transition.

Two-thirds of Chevron’s production in 2025 will come from just two projects: Tengiz in Kazakhstan and the Permian Basin in the United States will each yield 1MillionBOEPD.

In 2021, Chevron established a New Energies division devoted to lower-carbon technologies, pledging to spend $10Billion through 2028—about $2Billion per year, or 12.5-14% of Chevron’s projected capital.

The company has indicated that over the next 3 years it will spend some $10.5-$12.5Billion yearly in the USA, mostly in the Permian Basin and Gulf of Mexico. This means that at least 75% of Chevron’s total capital budget over that period is pledged for the U.S. market.

Outside the USA, Chevron will spend $3.5Billion, or 70% of its international budget, to develop its Tengiz asset in Kazakhstan, with the remaining $1.5Billion spent elsewhere. This is not promising for Africa, where Chevron has major operations stretched across the continent, including major projects in Nigeria, Angola, Equatorial Guinea, and Egypt that have received limited funding in order to bankroll Tengiz.

ENI states that 90% of exploration capex is spent on near fields and proven basins. Some $11Billion in the last 10 years has been spent on its dual exploration model—near fields and proven basins. The company states that it only requires three years—from first discovery of oil to market—twice as fast as the industry average. The company produces 1.7MMBOEPD, has a balance sheet which has an economic leverage of 20%, and has, according to its website,  an Internal Rate of Return(IRR) of 34%, the highest of all its peers  for the period 2012-2021. Also, its RRR(Reserve Replacement Ratio) of 110% for the period 2012-2021 is the highest compared to its industry peers.

A key ENI strategy  is developing a series of joint-ventures to ensure that ENI can achieve maximum leverage for its current oil and gas assets and at the same pursuing new strategies as part of its energy transition plan.  A key example is Azule Energy, Angola, a 50-50 joint venture between ENI and BP formed in 2022 to include both companies’ upstream assets, LNG and solar business. Azule Energy is now Angola’s largest independent equity producer of oil and gas, holding 2Billion barrels equivalent of net resources and growing to about 250,000BOEPD of equity oil and gas production over the next 5 years. It holds stakes in 16 licences (of which 6 are exploration blocks) and a participation in Angola LNG JV. The company also participates in the New Gas Consortium (NGC), the first non-associated gas project in the country.

Equinor’s has two pillars: natural gas and its growing offshore wind portfolio. Does the company have the financial depth and ability to achieve maximum leverage for both pillars?

Equinor’s offshore wind portfolio is pledged to grow to 12–16 GW of installed capacity by 2030. Renewables will receive more than 50% of capital investments by 2030.

Equinor has chosen a series of joint ventures to develop its offshore wind portfolio. The first, Dogger Bank, heralded to become the world’s largest offshore wind farm, is being developed together with SSE Renewables based in the UK. Located in the North Sea, the project will produce some 3.6 GW of energy, enough to power 6Million households. More recently, Eni has purchased a 20% stake in the Dogger Bank A & B Project.

The second is Equinor’s Empire Wind and Beacon Wind assets off the USA’s east coast. In September 2020 it was announced that BP was buying a 50% non-operating share, a basis for furthering a strategic relationship. The two projects will generate 4.4 GW of energy.

By 2030 the company will be spending more than one-half of its capital spending on low carbon energy to become a leader in offshore wind technology.

For 2023 the company has stated that its capital investments will range between $23Billion-$25Billion. Over a six year period ExxonMobil will invest some $2.5Billion per year in low carbon solutions: CCS (Carbon Capture and Storage) hydrogen initiatives and biofuels. The company will invest 70% of its capital budget in the Permian Basin (USA), Guyana, Brazil and LNG projects. By 2027 production is anticipated to be 4.2MillionBOEPD.

Annual capital expenditures in the near term, according to Shell, could be in the range of $21-23Billion. The company has stated that its renewables and energy solutions will be $2-3Billion compared to previous targets of $1-2Billion. This pales in comparison to the $3Billion earmarked for marketing, $4Billion in integrated gas, $4-5Billion in chemicals and products as well as $8Billion in upstream investments. For the period 2025-2030, Shell lumps together the capital budgets devoted to three categories:

Transition which entails Integrated gas and chemical & products will receive 30-35% of Shell’s capital outlay; and

Predicted Internal Rates of Return per category vary between 10-25%.

Much of TOTALEnergies’ hydrocarbon budget will be devoted to Africa in which  low-cost, high-value projects are the goal. Squeezing more value out of  various African assets to ensure a prolonged life cycle.

In Angola the company produces more than 200,000 boepd(barrels of oil equivalent per day) from its Block 17 and Block 32, and non-operated assets including AngolaLNG.

In Namibia TOTALEnergies has made a significant discovery of light oil with associated gas on the Venus prospect, located in block 2913B in the Orange Basin, offshore southern Namibia.

In South Africa the company is focused on its two South African assets: Brulpadda(drilled to a final depth of more than 3,600 meters) and Luiperd, the second discovery in the Paddavissie Fairway in the southwest of the block.

Deepwater production is expected to hit 10.4MillionBOEPD in 2022 and will reach 17Million BOEPD by the end of the decade.

Gerard Kreeft, BA (Calvin University, Grand Rapids, USA) and MA (Carleton University, Ottawa, Canada), Energy Transition Adviser, was founder and owner of EnergyWise.  He has managed and implemented energy conferences, seminars and university master classes in Alaska, Angola, Brazil, Canada, India, Libya, Kazakhstan, Russia and throughout Europe.  Kreeft has Dutch and Canadian citizenship and resides in the Netherlands.  He writes on a regular basis for Africa Oil + Gas Report, and guest contributor to IEEFA(Institute for Energy Economics and Financial Analysis). His book ‘The 10 Commandments of the Energy Transition ‘is on sale at https://books.friesenpress.com