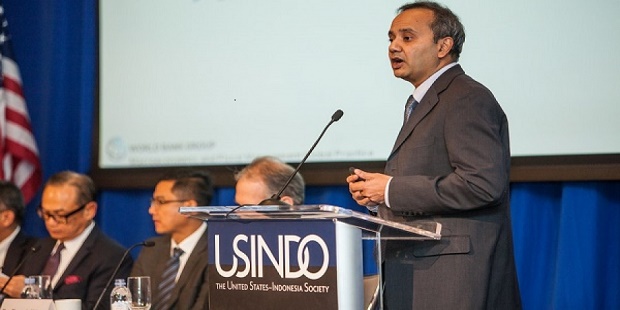 Shubham Chaudhuri, recently transferred from Afghanistan to Nigeria as World Bank Country Director, has been turning ideas on his mind explaining how high crude oil prices have impacted Nigeria in the last 50 years. And how they could impact Africa’s largest economy in the next decade.

He will be making public some of his conclusions as the speaker at the Quarterly Dinner of the Petroleum Club, Lagos on Monday, December 5, 2022.

Chaudhuri’s subject is Nigeria in a World of Higher Oil Prices; The Difference this Time and Longer-Term Implications.

The 16-year-old Petroleum Club, a private Club where leaders in the Nigerian Oil and Gas Industry and the technical elite of the oil patch, interact, unwind and share ideas on issues concerning the sector, thought this subject up, in part, to compare the challenges that the country faces in this current era of windfall prices, with what it faced in previous eras, including the “Oil Boom” period of the early to mid 70s, and the Gulf War windfall of the 1990s.

The Petroleum Club, at dinner

Chaudhuri, who spent a decade as an economics professor and Director of the Programme in Economic and Political Development at Columbia University in New York, before joining the World Bank in 2004, has been outspokenly critical of Nigeria’s spending of its oil revenues on subsidizing gasoline importation.

“Supposing the federation’s gross revenues next year (if oil production picks up) could be somewhere in the ₦12Trillion range”, he told ThisDay, an influential local daily, in an interview. “This N250Billion per month means ₦3Trillion over the next 12 months, which means the federation will essentially be spending 25 per cent of the entire federation’s revenue on premium motor spirit (PMS) subsidy”, he lamented. “That is the federation’s choice obviously, but is it an informed choice and does the public know who exactly is benefiting from this N3Trillion or who will benefit from this ₦3Trillion?”

The issues, on Monday evening at the Metropolitan Club in Lagos, are however broader. And they include mid- and long-term budgetary projections on the economy based on crude oil and gas revenues.

Chaudhuri’s areas of expertise are Macroeconomic and Structural Policies. He was the South Asia and Indonesia Practice Manager for the World Bank’s Macroeconomics and Fiscal Management Global Practice, where he oversaw macro-fiscal and economic policy-related work. He was the manager of the Washington, DC-based team of the Poverty Reduction and Economic Management Department for East Asia and the Pacific.

As Lead Economist for Indonesia, Chaudhuri was responsible for leading the overall economic policy dialogue, advisory and development policy lending work in Indonesia. He managed the Jakarta-based economics team, which works closely with partners in government and in the development community to further Indonesia’s development agenda. Prior to relocating to Jakarta in early 2008, Chaudhuri worked primarily on China and on East Asia regional policy issues.

« In Egypt, BP Digs in, Grabbing More Asset in the Mediterranean
TOTAL Hopes to Deliver Crude for Less than $20 Per Barrel in Angola’s New Development »