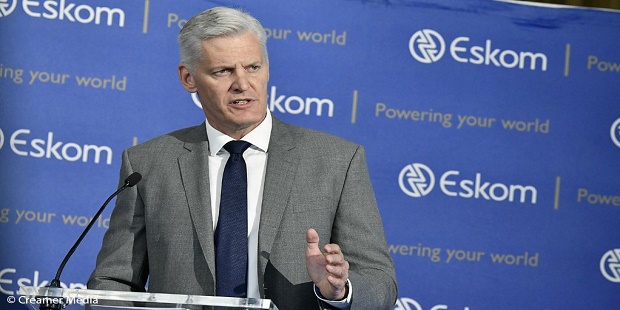 The former President of Sasol’s China Ventures had been at one of the country’s most important jobs for three years, having taken charge in January 2020.

The power utility said in a statement that De Ruyter had tendered his resignation on Wednesday, December 14. While he was obligated to only serve a 30-day notice, De Ruyter had reportedly agreed to stay in his position until March 31, 2023. “Mr De Ruyter has agreed to stay for an additional period beyond the stipulated 30-days’ notice to ensure continuity while we urgently embark on a search for his successor. His last day at Eskom will be March 31 2023,” said Eskom board chairperson Mpho Makwana.

The utility says it has no plan for the chairman to become an interim CEO and that a comprehensive executive search will be conducted to find a suitably qualified candidate.

Mr De Ruyter has often said that he took the job as an act of national service in January 2020 and as a critical plank of President Cyril Ramaphosa’s reform agenda. But he has presided over the most challenging period for power outages in the country. “2022 has been the worst year on record for power cuts in South Africa”.

The outgoing Eskom boss has a wide pool of supporters, who point to his forward-looking energy transition plans. “South Africa’s Just Energy Transition Investment Plan  (JET-IP), was lauded at COP27 in Egypt as best-in-class energy transition thinking”, writes Ferial Haffajee, associate editor of the Daily Maverick. The $8.5Billion JET-IP is designed to accelerate the move away from coal in a way that protects vulnerable workers and communities, and develop new economic opportunities such as green hydrogen and electric vehicles.