The Namibian Government Would Neither Guarantee, Nor Invest A Cent in Kudu Gas Development 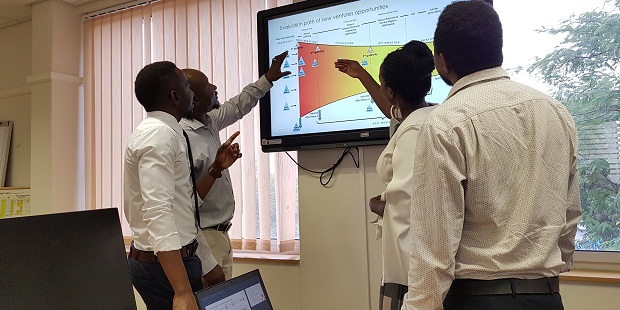 The Namibian government insists it does not want to ether invest, or give any form of guarantee for the Kudu gas field development.

Not even when it is meant to generate power for the country.

This point was reiterated several times over at a recent webinar on the country’s energy strategy.

Tom Alweendo, Namibia’s minister of Mines and Energy, told the webinar, organized by Africa Energy Chamber: “the government was required to put in as either capital or certain physical concession, but unfortunately, given our situation, we are not able to do that. And what we have agreed to do is to say, can we find another way to actually develop that field using another business model in such a way that the government is not necessarily involved in that”?

The comment, versions of which Mr. Alweendo has made on other platforms over the last two years, keeps being surprising, considering that natural gas inflow into an economy, more than anything else, energises it, as industrial clusters, as a rule, generally grow around processed gas.

The current business model the Minister referred to is the plan to process a fraction of the 1.3Trillion standard cubic feet of gas in the field, use it to generate 475 MW per day of electricity, supply some power to Namibia and export some.

The Namibian government has prioritized renewables over Kudu Gas to power and NAMPOWER, the power utility, does not include the project in its Five-Year Strategic Plan. It’s okay to do renewables, but what is the planned growth of electricity to be injected in the Namibian economy? Around 1 Million Namibians lack access to electricity, which means that almost half of the country is without access at all (~53% has access & ~47% has no access). These are World Bank 2019 figures. You have a meagre population of a 2.4 Million people and you can’t even provide them electricity.

Why? A lack of industrial mindset of considerable scale.

The state is saying that it doesn’t need the electricity from Kudu, but countries that have experienced significant degree of industrialization are known to have favoured availing their citizens far more electricity power than the economy demanded. Eskom of South Africa was one such example, long before it lost its way in the profligate corruption of the Jacob Zuma years.

In Namibia, no new investment has been made on sizeable generation of electricity in the last 30 years.

THE NORWEGIAN COMPANY BW Offshore concluded its farm in into the Kudu field acreage in February 2017, taking a 56% stake, with the state hydrocarbon company NAMCOR holding a 44% stake in the upstream and midstream segments of the project. The state power utility NAMPOWER, with its partners, will install the power plant, offtake the gas and convert it to electricity. But neither state owned enterprise has been able to get hold of their share of financing the project because the government is not keen.

NAMCOR was hoping that BW Offshore would carry it by paying its 44%, after the ministerial consent had been granted. But that did not happen. Further downstream, NAMPOWER is challenged in raising finance for its 51% share of the power generation side of the project.

The invoice for the Kudu Power Station in 2016, was about $749Million of which 75% would be raised as debt (limited recourse). The gas field development was expected to cost $1.15illion (70:30 debt/equity). The entire funding to get the project started was slightly less than $2Billion, although it’s not clear now what the cost will be, in the light of the current Pandemic induced crisis which has forced down the cost of EPC contracts.

Again, Kudu is not only about electricity. Access to natural gas has been known to benefit economies.

Mr. Alweendo is not interested. And the Namibian government is not prepared to do any thinking on its own around the development. “We haven’t had a formal engagement (with BW) as yet since last year(2019)  to see how far did we get to see if we can take if off the ground”, he told the webinar. “But certainly, I still think it is a potential development that can be carried out and the economic potential and the economic benefit coming from that is so immense and therefore, as a government, we will still want to see that happening but we just need to come up with a different business model than the one which was actually grafted earlier”.

This story was originally published in the June 2020 edition of the monthly, Africa Oil+Gas Report