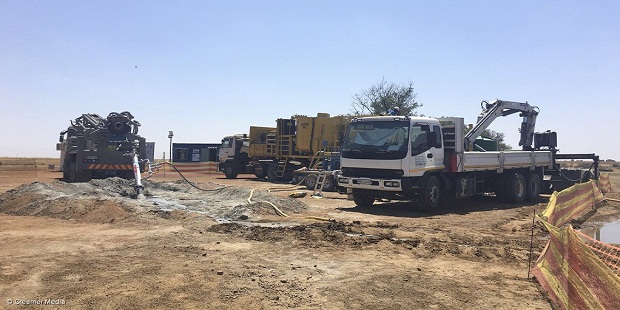 A gas well being drilled by South African independent, Renergen, has collapsed at the very position the company considers most efficient and cost effective.

The well had been on a horizontal course, but Renergen had moved the trajectory on inclined drilling through the sandstone sequence to intersect the underlying faults in the underlying volcanic rock.

But the base assembly was lost before breaking through the base of the Karoo sedimentary rock and the company decided it best to abandon the well. Renergen has thus, again, revised the drilling programme and has also secured a directional drilling rig.

The dual listed Renergen (JSE, ASX) is the only active South African independent in exploration and production of hydrocarbon. Its Virginia Gas Project covers 187,000 hectares of gas fields across Welkom, Virginia and Theunissen, in the country’s Free State.

The asset holds both natural gas and helium. Renergen currently sells compressed natural gas (CNG) from the hub, but following a plant expansion planned for completion in 2021, Renergen will instead produce liquified natural gas (LNG).

Earlier in the course of the drilling, the company reported “strong gas flows with high (up to 12%) helium”, and announced that technical issues had necessitated significant changes from the original horizontal well design. It also said that the sections penetrated by several side-tracks had provided valuable encouraging data for future development drilling. The company noted, then, that the key learnings from the drilling were as follows:

It was the inclined trajectory chosen after these “key learnings” that has now been compromised by the failure of the rig.

“It is unfortunate that the drilling rod broke”, commented Renergen ‘s CEO Stefano Morani, “but unfortunately accidents happen beyond anyone’s control. The silver lining is that it resulted in us gaining access to a fit-for-purpose directional drilling rig, which means we will be able to drill with far greater confidence and speed.”

“Where we were drilling one before, now we have multiple targets being drilled concurrently, and in some highly prospective areas where indications of gas are strong, and no exploration drilling has been undertaken to date,” he explained.