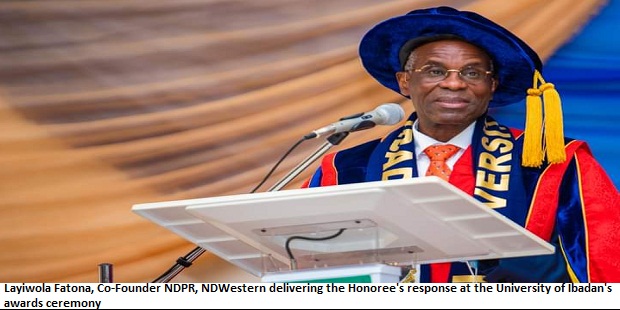 Theophilus Danjuma, Founder and Chairman of South Atlantic Petroleum (SAPETRO) and retired Lt. General of the Nigerian Army and Layiwola Fatona, Co- Founder and Chief Executive Niger Delta Petroleum Resources (NDPR), were two of four recipients of the University of Ibadan’s highest  honorary awards. The honours were conferred as part of the University’s 72nd anniversary ceremonies.

Abel Idowu Olayinka, the University’s Vice Chancellor, said that the institution did not deliberately set out to look for awardees from the oil industry. The nomination of General Danjuma came from the Medical Sciences, whereas he, he admitted, pushed for the choice of Dr. Fatona.

Olayinka, a professor of earth sciences who is close to the oil industry, is leaving the Vice Chancellorship position at the end of November 2020 after a five year term.  He wanted to honour Fatona, an alumnus of the University who he describes as an ‘industry icon’,  to be a fait accompli before he leaves.  “I can’t push for it from outside”, he told Africa Oil+Gas Report on the side-lines of the awards ceremony.

Although Danjuma and Fatona are known to have influenced the donations of hundreds of millions of Naira, to support the University, Olayinka said that  honorary awards are primarily more influenced by lifetime achievement than philanthropy. “But it is easier to convince the nominating committee of a candidate’s worth for an award when they can see evidence of his charitable causes on the campus”.

Danjuma has donated a Travel Fellowship for Kidney research to UI, Nigeria’s premier University. Fatona has, among other interventions, committed the NDWestern/NPDC joint venture to the construction of a multipurpose, four storey building for the study of geosciences.

The nomination and approval process for honorary awards is overseen by a Joint Committee of the Council and Senate of the University.

The outgoing Vice Chancellor has superintended the improvement in the University’s rankings to the Number 1 position in West Africa and to a placement between 400th and 500th in the world, according to The Times Higher Education World University Rankings 2020, which includes almost 1,400 universities across 92 countries, standing as the largest and most diverse university rankings ever to date.

But he is not entirely satisfied. “We can do a lot better”, he said, his right arm describing a wide arc of the campus; “There are, as of now, no students on campus. For eight months, Nigeria’s Federal Universities have been under lock and key, not only due to COVID-19 restrictions, but because University teachers are on strike. Its not very good”.