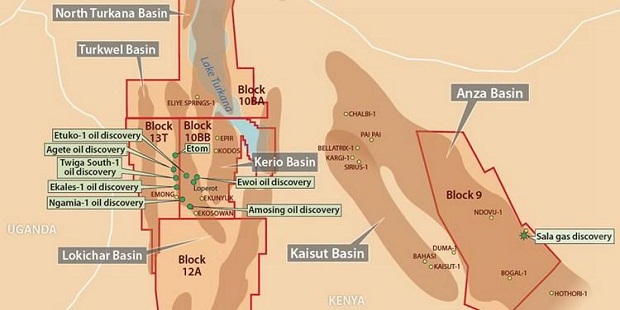 Tullow Oil has reported that the farm-down process in Kenya has been suspended “pending a comprehensive review of the development concept and strategic alternatives”.

The company and its partners, Africa Oil Corp. and TOTAL received a 15-month licence extension from the authorities on the 10BB and 13T licence blocks, which hosts the crude oil reservoirs that are the subject of development. Under the terms of the extension, partners have the right to extend the second exploration period for the blocks until 31 December 2020, with a further extension until 31 Dec 2021, contingent on an agreed work programme and budgets.

The partners are to use the extended time frame to work on “submitting an updated Field Development Plan by end of 2021”, Africa Oil says in a statement, a public admission that a Financial Investment Decision is unlikely to be taken any time before mid-2022

The Africa  Oil+Gas Report had earlier reported that the Kenyan Oilfield development would not reach FID before mid–2021. But that date, has now proven too optimistic.

The extant plan is that the Amosing, Ngamia and Twiga fields should be developed as the Foundation Stage of the South Lokichar development. This stage would include a 60,000 to 80,000BOPD Central Processing Facility (CPF) and an 892km export pipeline to Lamu.  The installed infrastructure from this initial phase can then be utilised for the optimisation of the remaining South Lokichar oil fields, allowing the incremental development of these fields to be completed at a lower unit cost post-First Oil.