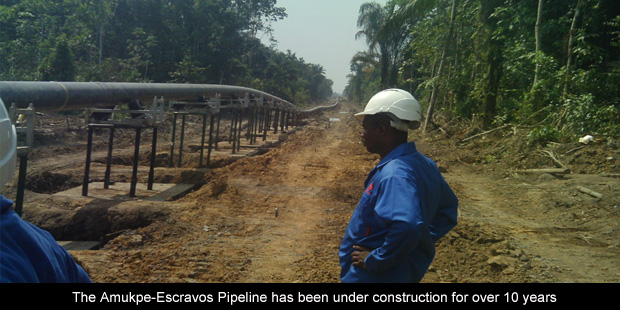 By McJohnson Mthembu, in Lagos

But they were later told that the plans had been cancelled, on the instructions of the Department of Petroleum Resources (DPR), Nigeria’s petroleum regulatory agency.

The problem is that two of these three assets are located in an acreage (OML 98) whose licence has been revoked by the Federal Government of Nigeria.

“The so called unveiling of the projects is illegal”, sources at the DPR told Africa Oil+Gas Report.

Construction of the Amukpe-Escravos Pipeline was embarked upon by Pan Ocean, primarily to export crude oil from OML 98, but the company’s rights to crude production on that acreage had been revoked since April 2019. As of June 10, 2019, Pan Ocean had lost the right to those crudes. In the same vein, the company no longer has the permit of the Nigerian state to operate the Ovade-Ogharefe Gas Processing Plant Phases I & II.

In their invitation to the media, Pan Ocean’s Public Relations advisers had declared that the company wanted, by the unveiling, “to communicate Pan Ocean Oil Corporation as a company that has kept its word by delivering these three projects which have the capacity to create hundreds of jobs, lift local communities and contribute immensely to power supply and the Nigerian economy”.

Pan Ocean’s licence to OML 98 was revoked as a result of its negligence in paying Royalty to government on the licence.

DPR officials tell Africa Oil+Gas Report that only President Muhammadu Buhari can decide to undo the revocation, even when the company pays up what it owes.

« Any Market for Nigerian Crude in the Next 20 Years?
How the Oil and Gas Industry Can Engage the Energy Transition »