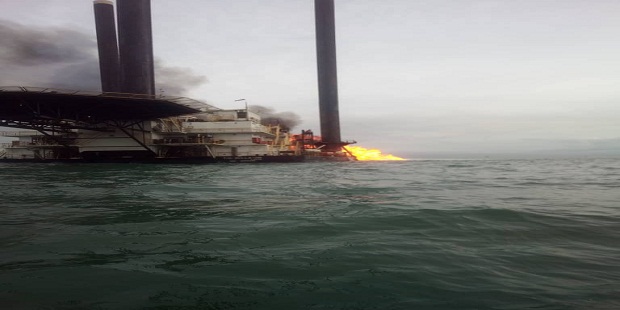 The Nigerian minnow, Guarantee Petroleum, has argued that the revocation order, sent to the company in early April 2020, right in the middle of a well re-entry process, encouraged a sense of pandemonium which resulted in the fire incident on the Grace-1 HWU, the hydraulic workover rig that was performing re-entry operations on Ororo field, in shallow water Oil Mining Lease (OML) 95.

“We had almost finalised operations”, Giwa explained, “We were at the bottom of the well (circa 10,000feet) we had opened four hydrocarbon zones, and taken all the plugs out. Baker Hughes was on site to put the tubings, (and complete the well). That was when the problem started. The service providers who could have intervened in the various well pressure amelioration work, were refusing to do their job”.

Nigerian regulatory authorities were well aware that there was an operation going on, there were safety issues involved and yet they revoked the licence of the operator with immediate effect.

The well re-entry commenced in October 2019 and officials of the Department of Petroleum Resources (DPR) were aware of the work, which they sanctioned, according to documents sighted by Africa Oil+Gas Report. Well control challenges started in April and when the revocation order came, “the service companies started reducing their work scope”. Giwa claims that as of Sunday, May 17, 2020, the DPR had not responded to letters and email messages on the fire incident.

Asked why the company had deployed a hydraulic workover rig to re-enter and work over a well that had prior record of overpesssured zones, Giwa said that the issue was not the rig competency. “The Blowout Preventer (BOP) stack and drilling mud pumps (designed to circulate drilling fluid under high pressure) were the same as a regular rig”.

Guarantee Petroleum, with its partner, Owena Oil, won the Ororo field in the 2002/2003 Marginal field round.

DPR is right to be concerned that the two companies had sat” on the licence for 17 years without applying a sense of urgency to bring the asset to production.

It is in the DPR’s remit to revoke the licence.

But it is wrong for officials, themselves geoscientists and engineers, to approve technical operations of this nature and financial magnitude (in excess of $20Million), with a high safety quotient, and revoke the licence right in the middle of the operations.