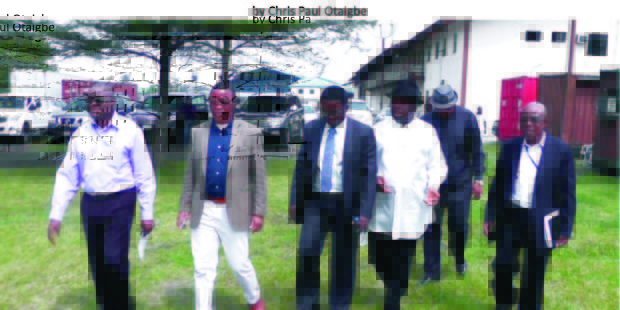 Weltek had the chairs and the tables set out as if it was preparing for a glistening bridal party.

On a recent Wednesday afternoon, at its premises in Port Harcourt, Nigeria’s main oil city, the engineering service firm had laid out seats for “important guests”  under three large canopies.  The setting looked surreal, if not incongruous, for a weekday. Ordinarily, this office facility would be busy with technicians and engineers working on heavy duty equipment to move out to a deep offshore facilityfor an Oil and Gas project.

What makes it more intriguing is that this homegrown Nigerian company is as busy as they come. It is currently engaged in Engineering, Procurement Installation and Construction(EPIC) of topsides facilities on the Floating Production Storage and Offloading(FPSO) vessel located on the Bonga Field, Nigeria’s flagship deepwater field.

Weltek is also designing, fabricating and installing wellhead safety control panels on the two wellsAroh-1 and Aroh- 2 on the onshore Aroh field operated by NPDC, an arm of thestate hydrocarbon company NNPC. The company is actively carrying out anupgrade of Flow station instrumentation and control from pneumatic to electronic using foundation field bus technology for five (5) Flow stations on three Shell operated fields: Cawthorne Channel, Awoba and Krakama fields in the east of Nigeria.

This is quite a bit on any company’s plate, let alone a Nigerian company’s.

So why is Weltek throwing a party on a workday?

It so happened that the projects outlined above were at the heart of the reasons why Weltek was entertaining guests. The company wanted to strutt its stuff. An explanation. If you were a Nigerian company carrying out engineering services, there’s a prevailing assumption that you could really just be a commissioned agent; that you didn’t really have the equipment; you don’t have quality staff to handle really technical stuff; that you were taking advantage of the new environment of local content advocacy, to grab for yourself a share of the pie.

Weltek belongs to a body, named Petroleum Technology Association of Nigeria(PETAN). Its founder and CEO, Pedro Egbe, used to be chairman of this association, which is determined to change that perception.

In short, that Wednesday afternoon’s social outing was a programme designed to stage an exhibition of some equipment, locally manufactured by this Nigerian company, or acquired and being used by staff of the company, to do Deep Offshore projects in Nigeria.

This event was to showcase Weltek, as an example of a PETAN member, who has grown technical capacity and works wholly as a technically honed Nigerian company.

Mr Egbe’s guests this afternoon, naturally includedEmekaEne, who is the incumbent Chairman of PETAN and, more pointedly,Ernest Nwakpa,  Executive Secretary(ES) of the Nigerian [R1]  Content Development and Monitoring Board (NCDMB) -The Facility Exhibition was to show and prove to Nwakpa and his team that a Nigerian indigenous company has the capability to stand shoulder to shoulder with any oil service company in any part of the world.

This point was emphasized in Egbe’s opening remarks as he recounted hisrelationship with the NCDMB Executive Secretary. “Ernest and I have been in thisfor a very long time trying to see how Nigerians can benefit by working from theresources that belong to them. The last attempt I remember was even in my village,we were the only Nigeriansin the group with  a lot of foreigners and we weretrying to convince them about how we as Nigerians can work with what we haveavailable to us – our local, natural resources.Then he wasn’t ExecutiveSecretary.”

Egbe, 60, has been in the forefront of pushing the Local Content issue in his over27 years in the Oil and Gas Industry. His passion to get more Nigerians toparticipate in the nation’s Oil and Gas Industry made him combine forces withcolleagues who share the same aspiration with him. “PETAN started on thepremise that we should not as a people, just work and when we die, have ourcompanies die as well. We wanted to work in a system where our governmentunderstood our problems, our dilemmas and ensured that our businesses could out-live us. That is why in 1990, we formed a corporate PETAN, and fought from thatyear till we were heard by the government. And today, I thank God we have theLocal Content issue addressed in our laws. This could not have become lawwithout drivers, people like Ernest and his team have tried to dedicate themselvesto the task and PETAN has not relented in ensuring that what we fought for,came to pass.

The exhibition showcased certain innovations and upgrades that were hitherto done outside the shores of Nigeria.

Some of the most challenging work that Weltek was doing was the flow station information technology systems upgrade in the Cawthorne Channel, Krakama and Awoba fields. “In the NCDMB Law”, Egbe explained to guests,“these areas are seen as things that could be achievedeventually, maybe in many years to come but we want to show today that such things could be achieved by Nigerians in this country”. He also claimed that “The SNEPCO BONGA North Topside project is the first grand field contract for a Nigerian deep off-shore field awarded to an indigenous company.”

Egbe, in the company of Weltek’s Executive Director Igweka Uche, led the guests to the various facilities in the company’s compound.

When they returned, the PETAN Chairman, EmekaEne, expressed his excitement to have witnessed the level of development he had just seen. “I don’t know how to say this,it’s a pleasure, and I mean this in the real sense of the word, to see progress, to acknowledge progress, to see the LocalContent drive become a reality. Executive Secretary, you can take back these words [to your board]:the LocalContent is working. It translates into know-how, technology, multiplying the value in the people’s skills, skills that can be applied over and over again in different scenarios. Every single time a milestone is breached, it becomes the stepping stone for the next milestone.Many people may say a thing is impossible but once it’s done, the limit of impossibility is stretched to the next level. More and more, translating value in our industry is becoming the key to growing local content and its impact. As the Weltek Chairman inferred, you don’t see the rest of the pyramid, what you see is the tip of the pyramid today. There are multiples of sub-contractors who worked on different components that fit into this whole system and this is the key. PETAN as an organization has brought together players in the oil industry that are interested in creating value and we see this as a very good example of what can be achieved at this level”.

Nwakpa, Nigeria’s Local Content czar, acknowledged what he called the patriotic zeal of those Nigerians who decided to own facilities that will add value to the Nigerian economy rather than playing agent to foreign companies in Nigeria must be appreciated. “That’s why people like Pedro, and the people that started PETANmust be recognized for their pioneering efforts.If we did not have a group that had already started practicing the Nigerian content, fighting for the Nigerian content, if we couldnot show what we had done with the policy, we would not have been able to convince the players to follow the policy of government. So, everything we are seeing today actually started from the efforts of PETAN, and we must give them kudos all the time. I remember in the early days, when we were drafting the Law and workingon the policy papers, PETAN had the likes of Pedro, Ugo Ralph Ekezie, and then the younger ones like Emeka [Ene]. The philosophy being discussed then wasdomiciliation, Don Pedro insisted that domiciliation would still allow foreigners to do the work, that it should be about indigenous entrepreneurship. We agreed that that was where we wereheaded but it had to be a gradual process”.

[R1] Is it Nigeria or Nigerian Content….Board?