By Toyin Akinosho, in Cape Town

The Government of Gabon has admitted that lack of three dimensional (3D) seismic data is a key challenge to its offer of acreages in onshore and shallow water terrains. 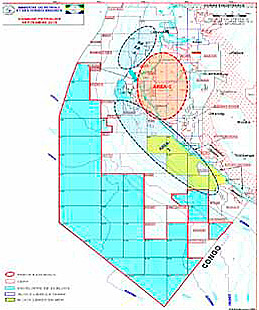 “The success story in the pre-salt onshore and offshore Gabon is the result of the improvement of seismic image over the years”, says Etienne Dieudonne N’goubou, Gabon’s Minister of Petroleum and Hydrocarbons. “However there is a lack of new seismic acquisition”.

The government announced the launch of the 11th licensing round at the Africa Oil Week Conference in Cape Town, South Africa, in late October 2015, fifteen months after it opened the deep-water focused 10th licencing round.

Deepwater Gabon is extensively covered by 3D seismic data, most of it acquired on the country’s behalf by by CGG, the world’s top seismic acquisition company. Shell and TOTAL have made significant discoveries of gas in water depths in excess of 1,500metres in the last two years, although Gabon is far from joining the league of deep-water hydrocarbon producers.

The Minister assures that Gabon will adapt its fiscal terms to the realities of low oil price regime.

In the onshore terrain, Mr. N’goubou declares that there is lack of seismic data along the (expected-to- be- prospective) Ogooue-river.  In the shallow water area, there is “need for new seismic acquisition to put in light the same pre-salt plays targeted in deep offshore”.  Gabon is “confident that new seismic acquisition associated with new technologies will lead to a new era of discoveries in the pre-salt in those open (shallow water and onshore) acreages”.

Apart from the 26 onshore and shallow water acreages, there are five deep-water tracts on offer in the 11th licencing round.

Agenda for the Gabonese Bid Round  are as follows:

For more information please go to the web site www.gabon11thround.com