Chevron, ENI, Tullow Lose Out in Angolan Bid Round 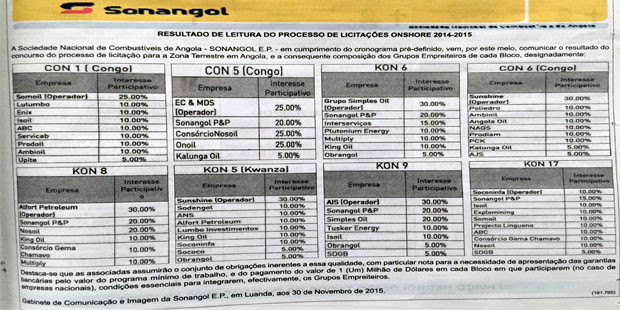 None of the competing major Western companies or midsized international independents made the list of winners of the 10 onshore acreages, which the Angolan government declared open for bidding in 2014.

This outcome of the keenly competed bid round feeds into the sentiments that the plan of the Angolan authorities, all along, was to use the bid round  for fast-tracking the indigenization of the Angolan E&P space.

Sonangol had promoted this bid round extensively, appealing to international companies at roadshows in Houston, London and Singapore. In the event, 84 Companies from over 12 countries  were pre-qualified and requested to submit their proposals. 47 of those companies were invited to bid as non-operators, while 37 were prequalified as operators. Italian giant ENI, US major Chevron and London Listed Tullow Oil, were among those pre- qualified as operators. The list also included Colombia’s EcoPetrol, Portuguese firm Galp Energy, Austrian independent OMV and the Anglo Swiss conglomerate Glencore, the prominent oil trader now vigorously paddling upstream.

But none of these international companies won, not even as mere 10% partners on the list. Those who won the bid for operatorship include –for the Congo Basin: Somoil (CON1), EC&MDS (CON 5) and Sunshine (CON 6), and for the Kwanza Basin: Sunshine (KON 5), Gruppo Simples (KON 6), Alfort Petroleum (KON 8).

As most of these companies have very little technical competence, even to evaluate technical data, they will return to International companies to help them out. Each of them will pay the $1Million signature bonus and will seek to engage technical partnership of foreign companies, the way Nigerian indigenous companies used to –and still do-shop around for “technical and financing partners” abroad.

This was a round meant to help local independents gain a foothold in the industry. The bid terms, from the outset, clearly stated that 20% Block participation will be awarded to the competing Angolan companies.  In the end however, the government didn’t have to invoke that part of the terms, because everyone that won a block was an Angolan indigenous E&P company.