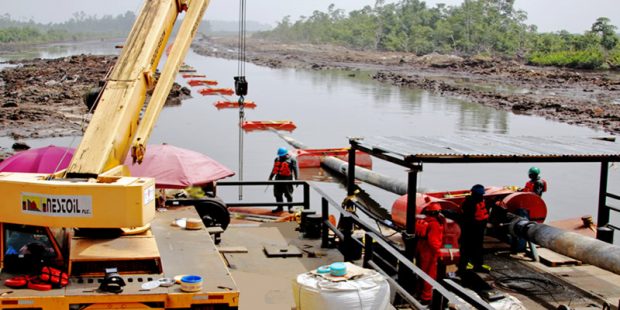 The schedule for completion of Obiafu-Obrikom to Oben (OB3) gas pipeline has been pushed further again, as a crucial part of the construction has been taken from one of the key contractors and handed over to others, who now have a global pandemic to deal with.

The 127 kilometre facility, under construction in Nigeria since 2013, is an important, grid length evacuation infrastructure, meant to deliver gas from the rich reservoirs in the eastern Niger Delta to the established markets in the west of Nigeria. On completion, it will enable the first major outline of a national gas grid.

Nestoil’s inability to run a 48 inch pipeline in a 60 inch hole under a riverbed spanning 2.8 kilometres, compelled the Nigerian Gas Transmission Company NGTC, the state firm sponsoring the project, to hand over that aspect of the operations to China Petroleum Pipeline Construction Company (CPPCC) and Brentex Petroeum Services, which is primarily a manufacturer of pipes.

Over the course of a full year between late 2018 and 2019 Nestoil attempted five times to run the fat pipeline under the riverbed, and for those five times, the formation collapsed. The mode of operation is ‘Directional boring’, also referred to as’ horizontal directional drilling (HDD)’, a minimal impact trenchless method of installing underground utilities.

The CPP has since imported equipment for the job, but the material had been held up in the Lags Ports for over three weeks, with Port officials unwilling to allow evacuation of the material, citing Coronavirus concerns.

All of which means that the target of completing the OB3 in June 2020 has failed, as other commissioning operations have to take place after the river crossing part of the project is done.

Nestoil was contracted to construct the 48” x 64.5 kilometre section of the OB3 pipeline from Omoku in Rivers State, to Umukwata in Delta State. The company said, in January 2019, that the project was 90% complete, and that it was looking to deliver it before the end of the year. But Nestoil has also lamented that its scope on the project spans the most challenging terrain of the pipeline. “Most of our 64.5 kilometre length runs through seasonal swamps, which are virtually impassable during the rainy season. In the past few years, average rainfall recorded in the Southern parts of Nigeria has increased steadily, resulting in unprecedented floods, especially in Rivers and Delta States”, Ernest Azudialu, Nestoil’s Chief Executive, told Africa Oil+Gas Report. “These flooded areas makes it almost impossible for appreciable work to be done during the rainy season”.

Engineering sources close to the project tell Africa Oi+Gas Report that Nestoil could invest more effort and tools in delivering the project and that NGTC could have exerted more oversight on the company’s operations. The depth of boring the HDD equipment, the sources argue, could have been deeper tan Nestoil appeared willing to go, and the contractor could have been targeting more compacted formations that would not readily break apart. Again, there have been observations that there were not always alternative rigs at the ready when one failed. Azudialo’s contention is that Nestoil is “constantly investing and improving our lot”.

The success or failure of the OB3 has ramifications for expansion of the domestic gas market in Nigeria.

In fact, its completion was a condition precedent for Final Investment Decision of some Domgas projects. It also provides alternative links to the Nigerian Southwest, whenever the crucial Escravos Lagos Pipeline system fails, as it often does.

This story is an updated version of the article that was published in the December 2019 edition of the Africa Oil+Gas Report, the monthly journal.