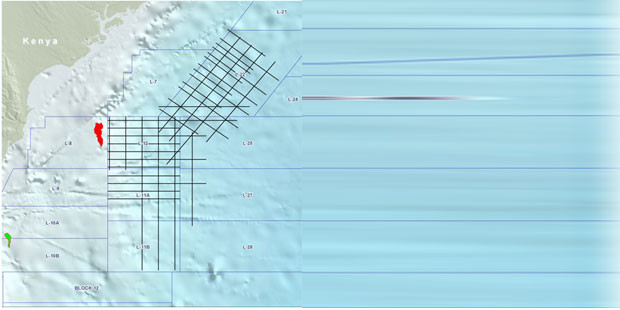 Kenyan authorities have given Erin Energy an eighteen-month extension of the Initial Exploration Period (IEP) of its offshore Kenya blocks, L27 and L28. The IEP on the two blocks has been extended to February 2017.Blocks L27 and L28 are in deepwater Lamu Basin in the Indian Ocean. This has been considered a gas prone area, but the discoveries have been very minor.

The additional time, the company says, “will allow to acquire 3D seismic data and to look for suitable partners on the blocks”, says Segun Omidele, Erin’s Senior Vice President, Exploration and Production.

Erin Energy is also hoping to be granted approval to enter the First Additional Exploration Period (FAEP) of both onshore blocks L1B and L16. The Company submitted application for the FAEP on both blocks in June 2015.

Analysts say that Erin is not as keen on spending its own money to acquire seismic data as it is in getting a well-heeled partner who will pay for the 3D acquisition on L27 and L28. Under the terms of the IEP, Erin is not obliged to drill a well. “The extension of the IEP of the Production Sharing Contracts for blocks L27 and L28 is effective as of August 9, 2015.

The required work remaining includes the acquisition, processing, and interpretation of 3D seismic data on both blocks. Erin Energy is the operator and has a 100% interest in both offshore blocks,” Erin reports.

« The Majors Avoid Uganda, Swoop on Angola and Mozambique
Sudan in Search for Gas, with China’s Help »