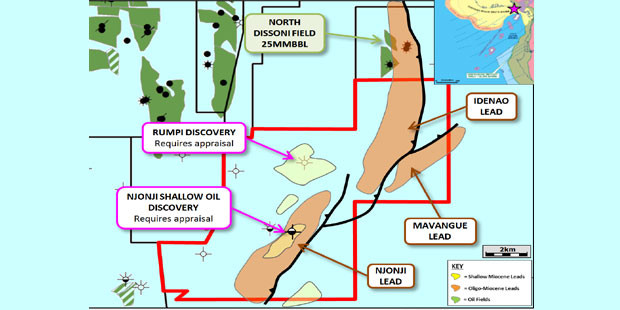 UK based minnow Tower Resources says its entry into Cameroon is at a low cost, eminently justifiable in a low crude oil price regime.
“Tower’s signature of the Thali PSC represents a low cost entry into a mature region with low-risk exploration/appraisal targets and the potential for significant upside”, the company declares excitedly.

The Thali block, located in shallow water offshore, was formerly known as “Dissoni” block.
The terms of the PSC, signed with the Cameroonian authorities on September 15, 2015, involve three exploration phases, including the minimum work commitment of the Initial Exploration Period:

“Tower has the option of relinquishing the PSC on completion of each Period on condition that the minimum work commitment has been met.

“The Thali PSC covers an area of 119.2 km², with water depths ranging from 8 to 48 metres, and lies in the prolific Rio del Rey basin, in the eastern part of the Niger Delta. The Rio del Rey basin has, to date, produced over one billion barrels of oil and has estimated remaining reserves of 1.2 billion BOE, primarily within depths of less than 2,000 metres. The Rio del Rey is a sub-basin of the Niger Delta, an area in which over 34.5 billion barrels of oil has been discovered, with 2.5 billion BOE attributed to the Cameroonian section”.

« Sudan in Search for Gas, with China’s Help
Tullow Regains Onal In Gabon »