Chevron Shares the Burden in Morocco 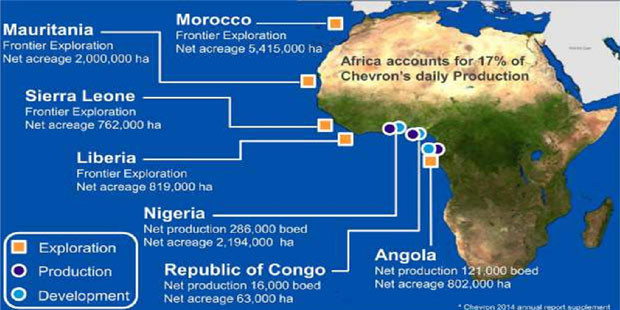 U.S Major Chevron Corp is sharing the burden of its obligations in Morocco. It has agreed to cede 30% of the gross interest in three deep water offshore leases in the Kingdom.

Qatar Petroleum will acquire the 30% interest in Cap Rhir Deep, Cap Cantin Deep and Cap Walidia Deep, while Chevron will retain a 45% interest and remains the operator. In the deal, which has been approved by the government, Morocco’s Office National Des Hydrocarbures Et Des Mines will continue to have a 25% interest.

Chevron has been closely watching the North and Central Atlantic margin play in the last five years. Apart from the three assets in Morocco, the company holds acreages in Mauritania.

But whereas deep water Mauritania and Senegal, in the Central Atlantic Margin, have experienced significant gas and oil finds respectively, Morocco’s string of dry holes has been second only to Namibia’s, in the south west, in the last three years. Chevron has not drilled a well in Morocco since it

It is clear that, in the partnership with Qatar Petroleum, Chevron is reducing its exposure in the country while Qatar is entering, largely, for diplomatic reasons. “It is no coincidence that Qatar Petroleum’s international presence is now extended to Morocco, a country which Qatar enjoys special relations with,” Saad Sherida Al-Kaabi, president and CEO of Qatar Petroleum, remarked during the signing.

The three offshore lease areas are located between 100-200 kilometers west and northwest of the Moroccan city of Agadir. They encompass approximately 29,200km2, with average water depths ranging from 100 meters to 4,500 meters.

« Bowleven Smells a Rat, Annuls Its Plans for Tanzania
Nigerian companies the only proven oil producers in the Ugandan Bid Round »