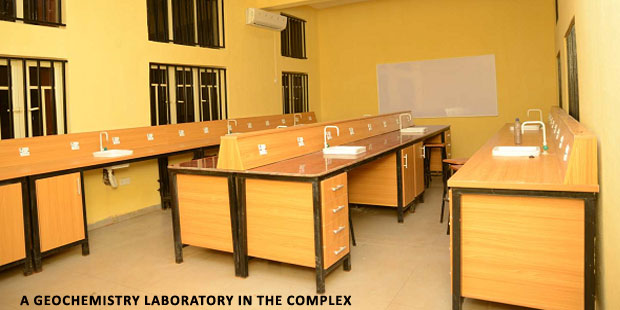 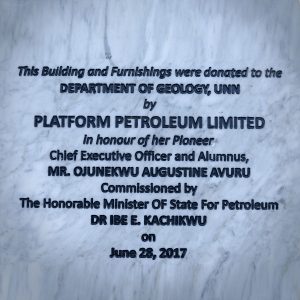 invited the industry and academia to its commissioning of a Geoscience Building in the east of Nigeria. 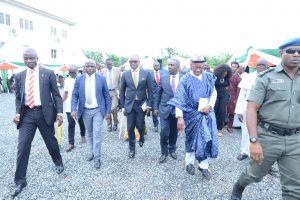 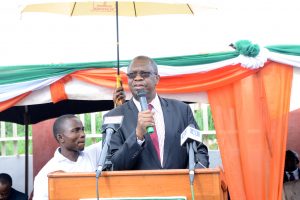 points facilitate easy movement in and out of the 5-block/wing structure. The facility sits on 6000 square metres with the built-up area accounting for 930 square metres. Ground to topmost ceiling height of 13.9metres and a wrap-around car port space with accommodation for 50 vehicles well parked. Water supply is provided by three 5,000 litre tanks situated behind the building.

Platform Petroleum Limited organised a bidding round to award the construction project. Safrador Nigeria Limited came out tops, and was awarded the contract on the 26th of October 2015.
Construction began the very next month of November starting with clearing and levelling the site. Groundbreaking occasion for the building construction itself held December 1st 2015 the board of Platform Petroleum Limited present for it.

The project divided into two phases Building Construction, Landscaping, Perimeter Fencing, Creation of a 100-metre Access Road and adjoining drainages 0.8metres deep by 0.6 metres wide being the first phase, while the furnishing of the building the second phase. 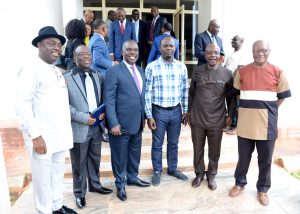 Total work scope took 16 months, logging 28,800 man-hours. The building construction which basically happened on site with blocks and paving stone created in-situ ran within specified time of a year ready for handover by December 2016 with the original presentation and handing over ceremony slated for December 26 2016.

Handover date was postponed because The University authorities wanted a little more. The building has its entire electrical and waste disposal facilities embedded in the ground for both aesthetic and practical reasons. According to the builder, trunk lines used to connect light from source buried underground though more expensive are the better option, same for the sewage disposal as they’re neater, safer and stronger. Specified ducts spread around the building make provision for repairs when needed.

A power-plant is located in the old Geological Building right across, powers the Austin Avuru Building in addition to the institution’s supply system. The building has an open space plan in accordance to oil and gas operating standards whereby an area made unsafe can be evacuated within the shortest possible time. It also serves for free-flow of traffic between the old Geological PTDF Endowment Building and the new Austin Avuru Building.

As such no reason for gates. White Texcote swathes the entire building, considering the regularity of rainfall and soil type present within the area, will such colour be the wise decision? “The use of Texcote is also to avoid unnecessary staining of the wall via human contact. Its prickly nature dissuades regular contact with human skin, ”he builder explains
HOW IT ALL BEGAN-
UNN’s department of geology had been “chased out” of their former basement abode in the Faculty of Biology and were managing the space at a smaller Geology Building built with an endowment fund by the Petroleum Technology Development Fund PTDF. That place wasn’t big enough to house lecturers, according to Dimchidozie .I. Princeton, a petroleum geologist and lecturer in the Department. It was created primarily for laboratories.

At an E&P summit K. Mosto Onuoha, Chair of the Shale Gas programme at the University, fellow of the Nigerian Association of Petroleum Explorationists (NAPE) and the longest serving member of the faculty, met with Austin Avuru, founding Chief Executive of Platform Petroleum and intimated him of the plight facing the department.

Avuru took action immediately. Communication began on May 12th 2015 when Project manager Nojeem Onifade brought an official letter stating Platform Petroleum Limited’s intention to present an endowment to the institution. Fast-forward two years later and a building is in place to house the lecturers of the department, provide laboratories, museum and dual lecture rooms.

THE MAKING OF THE ENTREPRENUER AUSTIN AVURU-
Moshe Ameachi, Acting Group Managing Director of Platform Petroleum Holdings, himself an Alumnus of University of Nigeria Nsukka, recounted a paper co-authored by himself and Austin Avuru which the latter presented at the 1988 NAPE Conference and Exhibition, stating the viability of the Marginal Fields Allocation. He at the time was a senior officer to Mr Austin Avuru at NNPC, the Nigerian state hydrocarbon company and he thought a Return On Investment (ROI) of 10% was good enough for the Nigerian entrepreneur to take advantage of.

They held on to the idea and when an opportunity presented itself, with the marginal field bid rounds of 20002/2003, they swung into action. Avuru became the Managing Director of Platform Petroleum, one of the over 80 companies that contested for the 24 marginal fields on offer. Platform had a redoubtable board: Edmund Dakouru, a respected geoscientist and former GM Exploration at Shell Nigeria, former GMD NNPC was its chairman. There was Sylvester Adegoke, one of the country’s top professors of geology, as was Moshe Amaechi himself, on the board.
Platform Petroleum led every other company in the bidding round and was awarded five fields, which got whittled down to three, then to one and half. It was called the Asuokpu-Umutu field. A total of 31 Nigerian companies (some of them in pairs), were awarded 24 fields in all.

Platform Petroleum went ahead to become the first of the 24 marginal field operators to bring its field on stream. They had partnered with Lekan Fadeyi’s Newcross Petroleum, which provided funding and thus began a sixteen year harmonious joint venture still exists at present. Austin Avuru led Platform until 2010 when seeking more challenges he took Platform into a partnership with Shebah Petroleum to birth SEPLAT PLC, which bought the 45% equity belonging to Shell, TOTAL and ENI, in Oil Mining Leases (OMLs) 4, 38 and 41.

If the Nigerian indigenous E&P landscape is a Universe, Austin Avuru is one of its shining suns. In less than three years since Seplat commenced operatorship of those three assets, with Avuru as its CEO, the company had tripled production and taken the company public listing on two stock exchanges- The London Stock Exchange and Nigerian Stock Exchange. He’s also championing the indigenous gas agenda and got an offtaker for SEPLAT’S produced crude, a step away from the agreements marginal field operators have with IOC’s to offtake their crude, often times a fractious contention.

Benjamin. C. Ozumba, a professor of Obstetrics and Gynaecology and Vice-Chancellor of University of Nigeria Nsukka, declared that Austin Avuru was a rare breed who 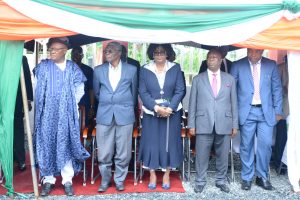 asks what he can do for the institution and fulfils his pledge.
OSA OWEIADOLOR, MANAGING DIRECTOR PLATFORM PETROLEUM Limited, describes the organisation he leads as “a local content vehicle dedicated to value-creation”. He stated the entire project creation has been a huge sense of fulfilment, responsibility and value creation which we believe earns us the right for more responsibilities.

For the man at the centre of it all Austin Avuru, here’re his words- “My father used to say, whatever God gives you, you should share it! There’s always something to share from whatever God gives. We do not talk about what we spent, we show you what we do! I expect the Department and University to maintain this facility, it’s already been built for them, maintaining it is a responsibility they should shoulder. Let’s do other things for other institutions across the country.

The student who would be utilising this facility should be the best and work hard at what they do. If this doesn’t encourage them, I don’t know what else will! Succinct words from a well tested proven hand”.

« Kachikwu To Open A $0.6MM Geoscience Building in Nsukka
‘WAIPEC 2018 Promises Even More’ »