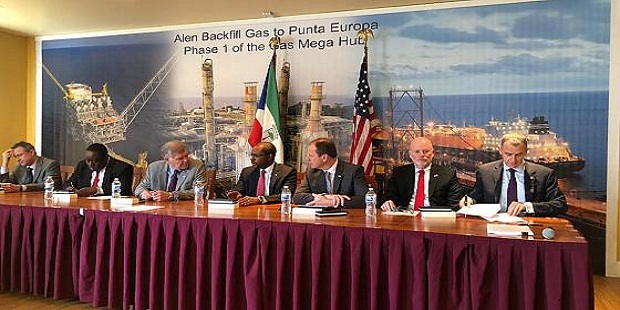 Chevron’s ongoing take- over of the US independent Noble Energy offers it the opportunity to lead a significant gas project in the Equatorial Guinea and Cameroon.

These two countries, along with Israel, make up the international portfolio on the list of properties, up for Chevron’s grab, in the $13Billion take over. As Africa Oil+Gas argues in its July 2020 issue, the California based major has prioritized the unconventional basins in the US as the raison dêtre for seeking to buy Noble Energy. Eq Guinea and Cameroon are a little below the radar in its ranking.

But the African Chamber of Energy (ACE) sees the bright side for the African opportunity. It is encouraging the authorities to facilitate Chevron’s entry into Central Africa’s “most ambitious gas project” through this take over.

“While the Alba Field has been feeding gas into the country’s Punta Europa complex for decades, including the EG LNG Plant, the AMPCO methanol plant and the Alba LPG plant, its declining reserves have led to the development of the Alen and Aseng fields as alternative sources of gas”, the Chamber recalls. “In 2019, Noble Energy was at the heart of a groundbreaking agreement to launch the Alen Monetization Project, expected to ensure continued and stable gas supply to Equatorial Guinea’s LNG and downstream revenue-generating infrastructure.

ACE appeals that “transaction and projects approvals should not be unnecessarily delayed ensuring a quick and efficient takeover in the region so ongoing gas projects are not delayed.”

NJ Ayuk, the Chamber’s Executive Chairman and Kickstarter, declares: “This acquisition gives the region a very experienced and credible gas player with tried, true and tested solutions to support our gas ambitions. ‘Fast tracking approvals and driving commonsense measures around this deal will make the industry work.”

Although ACE says that “these assets in Equatorial Guinea represent 94Million barrels of oil equivalent of proved developed reserves and 38Million barrels of oil equivalent of proved undeveloped reserves”, Noble Energy, on its website, talks of three trillion cubic feet of gross natural gas resources in the Douala Basin, “which positions us well for LNG sales exposure over the coming decade”.  Three Trillion Cubic Feet translates to 500Billion BOE. So, the chamber’s figures don’t add up. Not good enough for a supposedly optimistic release. ACE adds: ”In addition, Noble Energy was also the operator Block YoYo in Cameroon and of the deepwater Block Doujou Dak (60% WI) in Gabon, where it was in the process of evaluating recently acquired 3D seismic data.

“The project is still on track for delivery in 2021 and is the first step of the development of a much broader offshore gas mega-hub in the Gulf of Guinea. This regional gas hub would ultimately include the development of the Yolanda and YoYo discoveries located in Equatorial Guinea’s Block I and Cameroon’s YoYo Block, both operated by Noble”.

Noble Energy explains on its website: A 24-inch pipeline capable of handling 950 million cubic feet of natural gas equivalent per day (MMcfe/d) will be constructed to transport all natural gas processed through the Alen platform approximately 70 kilometers to the onshore facilities.

The reserves figures may look impressive, from where ACE sits, but American companies, as a rule, and Chevron is a good example, have, in the last five years tilted to E&P developments at home than abroad.

Ayuk calls for “a pragmatic commonsense approach that welcomes credible investors and see gas taking the lead in economic development and industrialisation, therefore the entry of Chevron is extremely welcomed and should be accepted by all stakeholders.”

“From its Nigerian and Angolan presence, Chevron understands the issues and opportunities of developing African content. We expect its entry to be beneficial from a local content and capacity building perspective,” said Leoncio Amada NZE, President for the CEMAC region at the African Energy Chamber. “We hope that the authorities in Cameroon and Equatorial Guinea can do an efficient and fast track the due diligence process and ensure that Noble meets all its obligations to exit and create a seamless transition for Chevron. This is an opportunity for our public authorities to demonstrate their commitment to empowering investment and move away from an era of uncertainty to give confidence to future investors and stay competitive”.

ACE is full of praise for Chevron’s leadership in African natural gas development. “Chevron is indeed a true gas player in the African market. In Nigeria, Chevron has been leading natural gas commercialization efforts for decades through its Escravos projects targeted the monetization of 18Tcf of gas. These have resulted in the Escravos Gas-to-Liquids facility and the Escravos Gas Plant, both cornerstones of Nigeria’s gas development strategy. In Angola’s Block 0 and Block 14, Chevron has demonstrated a remarkable ability to invest in cutting flaring and monetization gas. In block 0, it still operates what is the world’s largest LPG FPSO vessel, turning previously flared gas into cleaner fuels for Africans and the for the world.”