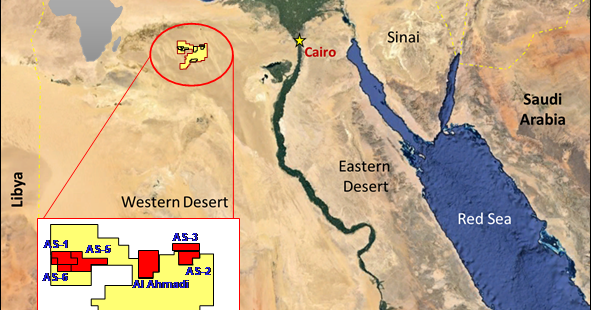 Kuwait Energy has flowed a modest crude oil rate and a trickle of gas after drill stem tests were performed on a new field wildcat well in Egypt’s Abu Sennan Concession in the Western Desert Basin.

The company flowed a cumulative maximum rate of 2,834Barrels of Oil Per Day (BOPD and 4.211Million standard cubic feet of gas per day (MMscf/d) on a 64/64″ choke in two reservoirs in the ASD-1Xwell.

For these two reservoirs, the Lower Bahariya and Abu Roash C, the cumulative minimum flow rate was 1,511BOPD and 1.232MMscf/d on a more constrained 32/64″ choke

Modest as these results are, they exceed Kuwait Energy’s pre-drill expectations.

The oil rates are actually higher than the Egyptian average, but the natural gas flow is incredibly small.

Still, the operator has gone ahead to submit an application for a development lease to develop the “field”, within the Abu Senanconcession.

ASD-1X, located 12km to the north-east of the producing Al JahraaField, reached Total Depth (TD) of 3,750m MD on March30, several days ahead of schedule and under-budget.

Apart from the t reservoirs tested, preliminary results suggest the well encountered a combined net pay total of at least 22m across a number of reservoir intervals, including the primary reservoir targets of the AR-C and AR-E, as well as the Lower Bahariya and KharitaFormations.

The well was drilled by the EDC-50 rig, which has now been moved to the Al Jahraa Field, also within the Abu Sennan concession, where the drilling of the AJ-8 development well commenced on May 2, 2021. This well will target the Abu Roash and Bahariyareservoirs in an undrained portion of the Al Jahraa field.

Below are details of the test results: