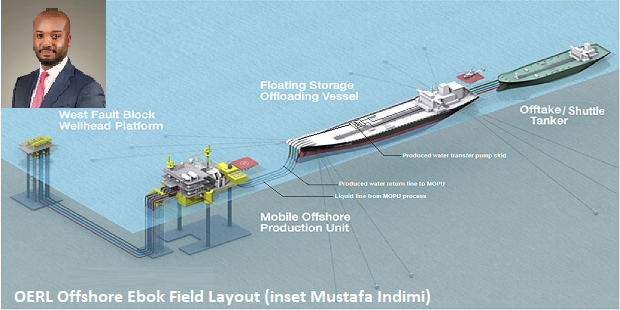 Mustafa Indimi has been appointed as the new Chief Executive Officer (CEO) of Oriental Energy Resources, the Nigerian independent and operator of the Ebok field in the country’s shallow water south east offshore.

He takes over from Ignatius Ifelayo, the personable, but self-effacing petroleum engineer and former General Manager with Chevron and Texaco. That Mr. Ifelayo, for over five years, ran the Indimis’ family E&P company, in which five of the seven-person board of directors are all  Indimis, is itself a measure of management skill.

Mustafa Indimi, who holds a master’s degree in petroleum production engineering from Robert Gordon University, was a planning engineer with Afren, the London listed firm which funded the development of the Ebok field and operated it from farm in agreement in 2008 through first oil in 2011, until Afren’s bankruptcy in 2015, when Oriental became the full operator, by default.

Ebok currently produces between 13,000-14,000Barrels of oil per day, a steep drop from around 22,000BOPD five years ago, which was itself a plunge from 40,000BOPD output recorded I January 2012. Part of the new CEO’s remit is to secure investment to boost the output as well as finalise development of Okwok field, the company’s other asset.

Indimi began work as planning engineer in the year of Ebok’s first oil His undergraduate studies focused on Economic Evaluation & Investment Decision methods at the Colorado School of Mines.

He was promoted project manager two years later in 2013, with oversight of Ebok field.

The new CEO was appointed Executive Director Oriental Energy Resources when the company took over operatorship of the asset, by default in 2015 and has held the position since.